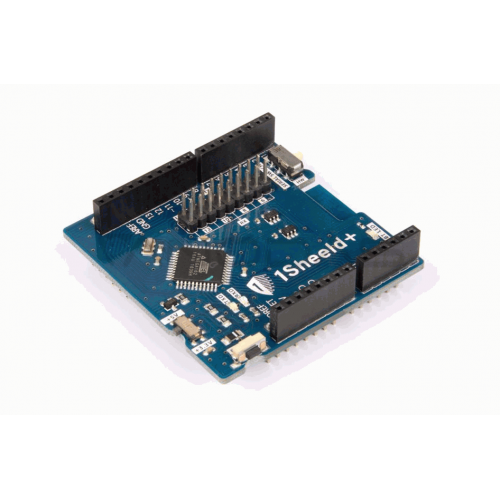 The 1Sheeld+ is an easily configured shield for Arduino. It has a built-in bluetooth low energy module that gives to your Arduino the capability to connect itself to your iOS and Android phones. Thanks to the 1Sheeld app available on the App Store and Google Play Store you can easily associate your Android smartphone to it and turning your smartphone in a shield itself.

Once connected you can control your Arduino with the smartphone sending data and controlling pins but you can also do the opposite. The 1Sheeld library gives to your Arduino the full control of the smartphone. So the Arduino can send e-mails, control the Camera, use Voice Recognition, send Facebook and Twitter notification and basically everything a powerful smartphone can do.

It is compatible with 5V and 3.3V boards.

What can you do with 1Sheeld?

Sky is the limit! You have a powerful smartphone that can be used to control your RC car, tweet when plants are thirsty, and have fun playing with your friends.

We have already developed a variety of shields for 1Sheeld like LED, Toggle Button, Buzzer, Slider, LCD, 7-Segment, Keypad, Music Player, Game Pad, Notifications, Twitter, Facebook, Foursquare, Gyroscope, SMS, Flashlight and Mic. And we have many other shields coming in the pipeline.

And many more shields at http://1sheeld.com/shields