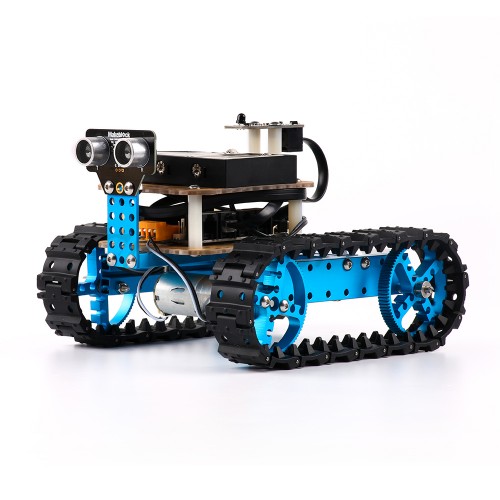 What is starter robot kit?

Starter robot kit, as its name shows, is a start for you to dip your toes in the waters of the robotics and maker world. With a set of beginner-friendly instructions, it takes you step-by-step on learning robotics, electronics and programming.

• Build a robot tank or a three-wheeled robot car.

With heavy-duty mechanical parts, easy-to-use electronic modules like Me Orion, ultrasonic sensor, IR receiver (Bluetooth module), you can get an enhanced hands-on experience on building a robot tank or a three-wheeled robot car that is programmable.

Starter Robot Kits is fully compatible with mBlock which is a graphical programming environment based on Scratch 2.0 Open Source Code. It makes programming projects and interactive applications easier through simply dragging and dropping function blocks.

Learning programming is way more fun when your code controls a robot. Based around an Arduino board, this kit will teach you all about programming a micro-controller board to control physical objects using sensors.

Follow the detailed, beginner-friendly instructions to construct your choice of a robot tank or three-wheeled robot car.

Connecting 38 tracks together, this starter robot kit can be built as a robot tank. With the ultrasonic sensors on the deeper position, the robot tank will be able to detect obstacles timely and correspondingly change its direction to avoid collisions.

Modules in this kit all equipped with RJ25 ports for easy wiring. Just by connecting the modules together, robots can be built in a really quick way. All the wiring is simple and very clean.