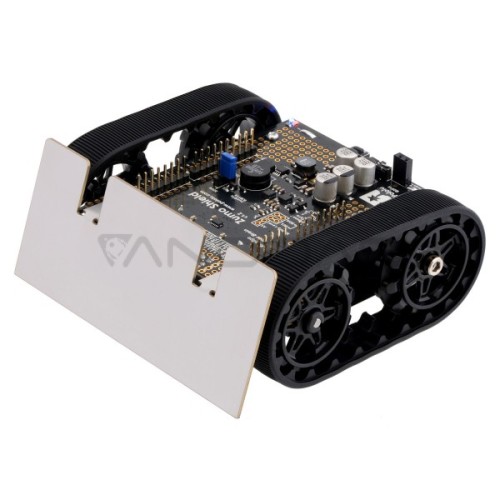 The Zumo robot for Arduino is an Arduino-controllable tracked robot platform that is less than 10 cm × 10 cm—small enough to qualify for Mini Sumo. It includes two micro metal gearmotors coupled to a pair of silicone tracks, a stainless steel bulldozer-style blade, an array of six infrared reflectance sensors for line following or edge detection, a buzzer for simple sounds and music, and a 3-axis accelerometer, magnetometer, and gyro for detecting impacts and tracking orientation. Just add 4 AA batteries and an Arduino (or compatible controller) and you are ready to push! No soldering or assembly is required.

This Zumo robot is a low-profile tracked robot platform intended for use with an Arduino (or compatible device, such as an A-Star 32U4 Prime) as its main controller. It measures less than 10 cm on each side and weighs approximately 300 g with an Arduino Uno and batteries (165 g without, as shipped), so it is both small enough and light enough to qualify for Mini-Sumo competitions. It uses two 75:1 HP micro metal gearmotors to drive the treads, providing plenty of torque and a top speed of approximately 2 feet per second (60 cm/s), which makes it much more agile than competing robots like the Solarbotics Sumovore and Parallax SumoBot while still offering plenty of control. The Zumo robot includes a 0.036"-thick laser-cut stainless steel sumo blade mounted to the front of the chassis for pushing around objects like other robots, and a reflectance sensor array mounted along the front edge of the Zumo (behind the sumo blade) allows the Zumo to detect features on the ground in front of it, such as lines for following or edges for avoiding.
The Zumo control board is essentially a shield for the A-Star 32U4 Prime, Arduino Uno or Arduino Leonardo, each of which can be plugged directly into the shield’s male header pins, face down. (It is not compatible with the Arduino Mega or Due, but it can be used with older Arduinos that have the same form factor as the Uno, such as the Duemilanove.) The shield includes dual motor drivers, a buzzer for playing simple sounds and music, a user pushbutton, and a 3-axis accelerometer, compass, and gyroscope for sensing impacts and tracking orientation. It also boosts the battery voltage to power the Arduino and breaks out the Arduino I/O lines, reset button, and user LED for convenient access and to accommodate additional sensors. The only difference between this and the previous Zumo Robot version is the use of a v1.2 Zumo shield in place of the previous shield version. This newer control board has a newer accelerometer/magnetometer module and adds a 3-axis gyroscope, but it is otherwise identical to the previous shield.
Our Zumo Arduino libraries make it easy to interface with all of the integrated hardware, and we provide a number of sample programs that show how to use the Zumo’s reflectance array, pushbutton, buzzer, and motors. We have also written a basic LSM303 Arduino library and L3G Arduino library that make it easier interface with the built-in LSM303D 3-axis accelerometer and magnetometer and L3GD20H 3-axis gyro.
The robot ships as shown in the main product picture; no assembly or soldering is required. An appropriate Arduino (or compatible controller) and four AA batteries are required but not included.

Features
•    Integrated 75:1 HP micro metal gearmotors that offer a good blend of speed (up to 2 feet per second), power, and control.
•    Mounted array of six IR reflectance sensors that allows the Zumo to detect contrasts in reflectivity directly beneath its blade, which can be used for following lines or detecting edges (e.g. the white outer area of a sumo ring or the edge of a table).
•    Integrated DRV8835 dual motor drivers capable of delivering enough current for the Zumo’s two high-power gearmotors.
•    Piezo buzzer for playing simple sounds and music. The buzzer is controlled by one of the Arduino’s PWM outputs, so tones can be generated in the background without taking up a lot of processing power.
•    Integrated LSM303D 3-axis accelerometer and 3-axis magnetometer that can be used to detect impacts. The compass gets a lot of interference from the motors, batteries, PCB, and its surroundings, so it is not generally useful for precision navigation, but we have found that with proper calibration, it can be used for rough orientation measuring in many environments. This part is an upgrade over the LSM303DLHC accelerometer/magnetometer IC included on previous versions of the Zumo shield for Arduino.
•    Integrated L3GD20H 3-axis gyroscope that can be used to track rotation. This is new on the v1.2 version of the Zumo shield; previous versions did not include a gyro. With this sensor and the LSM303D mentioned above, the shield effectively has a built-in MinIMU-9 v3 IMU module that can optionally be used to make a attitude and heading reference system (AHRS) so that your robot can track its orientation.
•    Optional user pushbutton on pin 12.
•    7.5 V boost regulator for powering the Arduino from the Zumo’s 4 AA batteries.
•    Convenient access to Arduino I/O lines, the pin 13 user LED, and the Arduino reset line via the shield.
•    General-purpose prototyping areas and an expansion area at the front for connecting additional sensors.
•    Compatible with the Arduino Uno R3 and Arduino Leonardo. Can also be used with older Arduinos that have the same form factor, like the Duemilanove.
•    Arduino libraries and sample code make getting started easy.
•    Detailed user’s guide.

Optional accessories
Optical rangefinders for obstacle/opponent detection. We carry both analog and digital rangefinders that detect at distances useful in regulation mini-sumo rings.
iMAX-B6AC battery charger for charging the Zumo’s battery’s through the Zumo Shield’s 2-pin charge port. Note that you only need a battery charger if you plan on powering the Zumo with rechargeable cells, and that charger should be capable of charging 4 NiMH cells in series. Alternatively, since the Zumo just uses ordinary AA batteries, you can use AA chargers (into which you stick the individual cells) available at most general electronics stores.
Connectors (headers, jumper wires, etc) for adding more sensors.
Replacement sprockets in red or white. The Zumo robot for Arduino includes the black sprockets shown in the left picture below, but other colors can be purchased separately if you want to add a bit of personalization to your robot. The following pictures show the newer Zumo 32U4 Robot, which is based on the same Zumo chassis and therefore uses the same sprockets:

Comparison with the Zumo 32U4 robot
The newer Zumo 32U4 is another robot based on the Zumo chassis. It is a more highly integrated robot than the Zumo robot for Arduino, with enhancements that include a built-in Arduino-compatible ATmega32U4 microcontroller (the same one used in the Arduino Leonardo and A-Star 32U4 boards), an LCD, encoders for closed-loop motor control, and proximity sensors for obstacle detection. The Zumo 32U4 main board effectively combines the functions of the Zumo Shield and the separate Arduino controller into a single, compact board that is just as easy to program as a standard Arduino or A-Star thanks to its USB interface and preloaded Arduino-compatible bootloader.
Some of the pin mappings and software libraries differ between the Zumo 32U4 and Zumo robot for Arduino, so programs written for one robot generally need to be modified to work on the other.