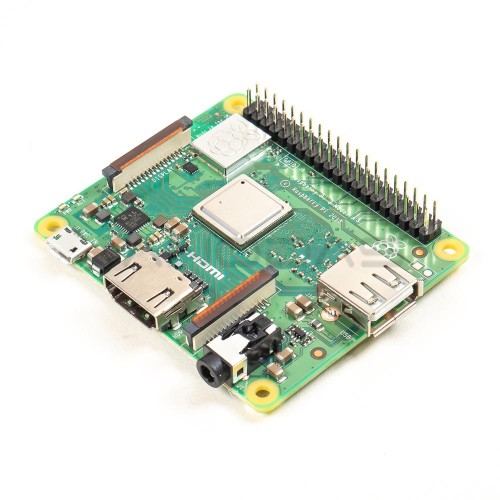 Pint-sized power! The Raspberry Pi 3 Model A+ packs all of the processing and wireless power of the 3 B+ into a significantly smaller package.

It works great with our HATs and pHATs, and we've got brand-new Pibow Coupé cases, in four colours including RAINBOW!

With the ARMv8 processor it can run the full range of ARM GNU/Linux distributions, including Snappy Ubuntu Core, as well as Microsoft Windows 10 IoT edition.

You'll need the latest NOOBS image for the Wireless LAN and Bluetooth drivers to be installed. We sell a pre-imaged NOOBS card.

Adding one of our three-port USB hubs with ethernet will let you use additional USB devices and add wired networking.

The previous A+ had a single-core 700MHz CPU, but the addition of the quad-core 1.4GHz BCM2837 SoC with improved thermals to the Pi 3 A+ gives a huge performance boost. The VideoCore is clocked at 400MHz for video processing and the 3D graphics processor runs at 300MHz.

The dual-band 2.4GHz and 5GHz wireless LAN enables faster networking with less interference (although the higher bandwidth has less range), and the new PCB antenna technology should allow better reception.

Bluetooth allows you to use a wireless keyboard/trackpad without extra dongles, keeping things nice and tidy.

The GPIO header remains the same as the previous A+ (and the Pi 3 B+ and Zero / Zero W), with 40 pins. Be aware that the new metal shielding on the wireless circuitry and the SoC may cause shorts against larger components on the underside of HATs, pHATs, and SHIMs. In the first two cases, standoffs will help; in the latter, a couple of small pieces of insulating tape or Kapton tape will prevent any shorts.

Note that older Pibows will not fit the new Pi 3 A+! Because of changes to components on the topside of the board, we've redesigned our Pibow Coupé case to ensure it fits snugly.