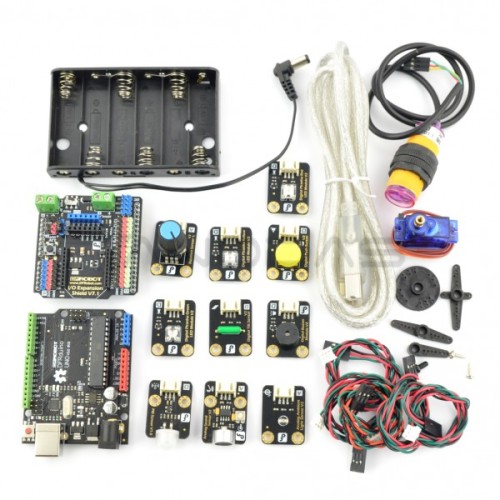 Gravity Arduino Starter kit is a plug&play electronics toolkit that provides Arduino beginners and makers with the easiest experience of learning and playing with the Arduino platform. Gravity Starter Kit includes a DFRduino UNO R3 microcontroller, which functions exactly the same as Arduino UNO, and 12 most popular and interesting electric components and sensors. With the IO expansion shield, sensors can be connected directly onto the board without jumper wires or bread board. Sensors in the kit belongs to DFRobot’s Gravity Series. These sensor are built highly modularized and interact with microcontrollers with 3-pin pinhead. Moreover, Different types of sensors can be easily identified by the logo printed on the back of the PCB board. All components included in the kit are fully compatible with Arduino microcontrollers. With Gravity Starter Kit, making your project will just be as simple as building blocks. Gravity Starter Kit is also provided with tutorial, which aims to help Arduino learners understand Arduino programming. The tutorial goes through the installation of the software, the Arduino IDE, and its programming language, then teach you how to build electric circuit, how to use different electric components and their signaling. It also includes instruction for building projects from lighting up an LED to eventually use multiple components to make a real project such as “Fire Alarm” or “Weather Station". The tutorial is full of graph and is written in a simply way that anyone could build their own project using Gravity Starter Kit with no difficulty.

Arduino Project introduction: What is Arduino？

Arduino Projects 1: How Does a Device “Think”?

Arduino Zero to Hero Kit with an online course
Dfrobot
132.90€
Add to Cart