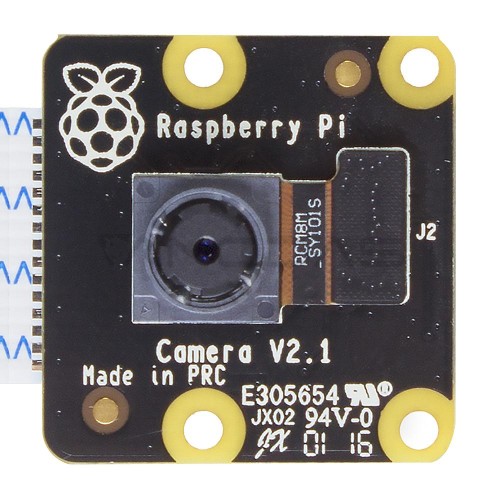 The upgraded Raspberry Pi high definition (HD) Camera Module v2 is the new official camera board released by the Raspberry Pi Foundation which connects to any Raspberry Pi or Compute Module. The Raspberry Pi Camera Module v2 is a high quality 8 megapixel camera based around the Sony IMX219 image sensor – allowing you to create HD video and still photographs. It is a custom designed add-on board for Raspberry Pi, featuring a fixed focus lens. It’s capable of 3280 x 2464 pixel static images, and also supports 1080p30, 720p60 and 640x480p90 video. It attaches to Pi by way of one of the small sockets on the board upper surface and uses the dedicated CSi interface, designed especially for interfacing to cameras.

With a tiny size at around 25mm x 23mm x 9mm and a weight of just over 3g it makes it the perfect accessories for mobile or other applications where size and weight are important. The Raspberry Pi Camera Module offers reduced image contamination such as fixed pattern noise & smearing. It also features automatic control functions such as exposure control, white balance and luminance detection.

Connecting the Camera Module to your Pi:

A 15 cm ribbon cable (included) attached to the module slots straight into your Pi Camera Serial Interface port (CSI). Once connected, you can access the camera board via the Multi-Media Abstraction Layer (MMAL) or the Video for Linux (V4L) APIs. Alternatively there are libraries such as Picamera Python, and many others that you can find online.