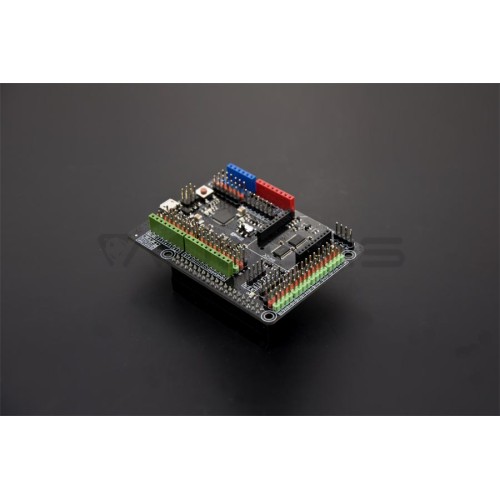 Arduino shield for Raspberry Pi. This DFRobot device makes it easy to combine Arduino speed and Raspberry Pi computing power. Why an Arduino if the Raspberry is much more powerful? The advantage of the Arduino is its simplicity - state changes occur in a flash due to a particularly simple control system, while Raspberry uses the Linux OS, which has many more features, but like all operating systems, slows down the computer. For this reason, many advanced projects use both microcomputers, the Arduino as a fast-reacting "nervous system" to control sensors and motors, and the Raspberry as a "computing power" brain for image recognition and other intensive computing. Version Zero 1.3 has an overclocked processor, camera jack and other enhancements.

Note: The microUSB power supply is sold separately. The camera portonly works with the Zero cable, a simple Pi cable is not suitable for it.